People were calling it "a miracle day." A biologist who had been on expeditions to Antarctica more than six years said he could count on one hand days like it. Others said, "We must have angels with us." And while some attributed the experience to the "weather gods" and others called us "lucky" or said "lady luck" was with us, we passed the word along that the glory went to the one, true God and that people had been praying for this trip for nearly a year ahead.

After a few days of uncanny good weather, the 134 members of the Antarctica expedition began to notice the difference. Then, when we entered the Drake Passage (named for Sir Francis Drake) and the winds and waves were at "force 2" instead of the usual "force 10," people talked even more. But then when we had sunshine, blue skies, calm seas, and headed into Neko Harbor for an unscheduled landing on Antarctica proper, the buzz really increased.

From the National Oceanic and Atmospheric Administration (NOAA)

Our "miracle day" had begun at Deception Island. Only because of the good weather could we land there. Climbing up Neptunes window, a rather steep slope, you could see Antarctica proper, the continent itself. The weather continued to be so remarkable that we got into Neko Harbor in the afternoon. It was all deep snow up to your knees, ice, a "wet landing," and penguins marching along their penguin highways. Our mission team saw the hand of God in all of it as we climbed through the snow in our "mountain man" gear, boots, gloves, and all, to a place on the rocky slopes.

There we did as God had commanded through the Holy Spirit. As we were as close to Mt. Erebus as we were going to get, we proclaimed Jesus Lord over death, hell, and the grave. I closed the gate to hell to the elect of God and opened the gate to receive the reprobate. We set twelve foundation stones and proclaimed Jesus Lord over all the earth. I poured spikenard and salt on the earth and proclaimed Jesus Lord over the masses and established the covenant of Jesus with all mankind and creation. We also poured spikenard and salt into the seas. I released the judgment against the nations (Matthew 25) and proclaimed the Day of Vengeance of our God to begin now. We scattered and released the seeds of the harvest of souls to be saved. We released the light of the world, the joy of all nations, and commanded the glory of the Lord to cover the earth. We applied the Blood of Christ on earth as it is in heaven.

There in Antarctica, the uttermost part of the earth, we proclaimed the message of the gospel. I released the creative power of the Word into the air, into the soil, and into the waters as to the very foundation of the earth. We proclaimed Jesus Lord, Psalm 24, and called in the whole earth as His inheritance. We understood that we were planting seeds that would sprout as others came to water and plant the church of Christ.

Another unscheduled stop at King George Island allowed us to go to the Polish science station there and learn more about the scientific research and projects going on in Antarctica. Seven nations have stations on King George Island alone, sharing the space with birds, penguin rookeries, and seals. Much of the research concerns weather, but also the effects of warming. Many fossils have been found, from plant life to very large penguins to marsupials, linking Antarcticas past to South America and Australia. No human fossils have been found to date. The impact of tourism has been that science stations have to "clean up their act." While the danger to the environment looms, greater good seems to come with people raising awareness about Antarctica, the plight of the voiceless creatures, and the delicate balance of nature.

What I received from the Holy Spirit was this. The elect from every nation will come in and then the wrath of the Lamb shall be released upon those who disobey and disbelieve the Christ, the Child of the Holy Ghost. Many will blaspheme and mock the Holy Ghost, sealing their destiny as children of wrath, even as preachers water down the gospel more and more, denying the lake of fire, denying Gehenna and any and all places of punishment. The people will be armed into delusion so as no longer to despair of their sin and godlessness, lawlessness and apostasy.

As their doom impends upon them, they think themselves pure, okay, good, unworthy of such destruction, for they see not their sin, their falling short. In diminishing the holiness of God, they judge Him and desire Him to be as they are. They are less than they should be and could be and so they desire to make God the Almighty less than He is and will be.

Suffer with those who will come to Craighouse. [or to your church or sphere of influence for Christ] Love them. Give them the truth and pray they will receive, acknowledge the truth and conform to it.

Little ones, keep yourselves from idols. Remain alert and watchful. Be innocent as doves but wise. Let wisdom enter your hearts. Be guided by the Spirit of Wisdom and Revelation, the Spirit of Truth, the Spirit of God.

Pastor Jim and I want to thank you for praying and giving to this endeavor. Your standing with us these past years has enabled MCM to call in every nation of the world and all seven continents to repentance and resurrection. Indeed, with your help and you by our sides, this ministry has been witness to Jesus in Jerusalem, Judea, Samaria and to the uttermost parts of the earth.

After Antarctica, we had another "force 2" crossing of the Drake Passageunheard of. Then we landed in Ushuaia (you-shuway-a), which describes itself as "the end of the world." Thats because it is the southernmost city on the earth.

As I have reflected on this mission, watching, witnessing, and listening to others on the expedition, I noted the reality of Jesus words in John 3, "Unless one is born again, he cannot see the kingdom of God." Unless you are born again, you dont see the kingdom of God. You cannot enter the kingdom of God. God was all around us, giving testimony of Himself in the heavens and on the earth, in His creatures, in the ice formations, in the glory of the "miracle day." The believers on board saw the hand of the Creator/Redeemer. They were drawn to us and to one another, for the same Holy Spirit dwelt within. The unbelievers went up and down like the waves of the sea, their emotions rising in great swelling words of their luck and falling with the fog.

I preferred to reflect on the idea that the waters, the Word, and the will of the Father come into agreement as we proclaim the Word, which is the will. The waters bring it forth, nurturing and carrying it to completion. We are not to falter or confuse the waters, making them turbulent with varying words, but rather, try to be consistent. The waters will flow downward with great power unless hindered by stones of stumbling, debris of filth, forked tongues, etc. With spiritual eyes, we will see the mighty rushing waters and move with the flow of the Holy Spirit.

I found this quote by an early explorer of Antarctica, Henry Robertson Bowers. Christ came to him and showed him why we are here and what the purpose of life really is. "It is to make a great decisionto choose between the material and the spiritual, and if we choose the spiritual, we must work out our choice, and then it will run like a silver thread through the material." (Thompson, David. Scott, Shackleton and Amundsen: Ambition and Tragedy in the Antarctic. NY: Thunders Mouth Press, 2002, page 146, 148.)

It is said that Antarctica changes you; it is so pristine. Hopefully, people wont ruin it while they take its beauty into their souls. There in the most hostile place on earth, I found myself filled with peace. There in Neko Harbor, the rumble of an impending avalanche of ice reminded us of the dangers all around. Yet didnt Jesus say that in the world we will have tribulation? The peace He gives is within us, just like the kingdom of God, which the Father is so pleased to give us. Even when our hearts condemn us, God is greater than our hearts. It is cause for cheer. It is cause for celebration. It is cause for courage.

Those of you in our vicinity, seize the opportunity to witness for yourselves the testimony of all God did on this mission trip. Pastor Jim, Steve, and Joanna took movies as well as pictures of the penguins, the people, and all the places where the Word of the Lord went forth. Saturday, February 22nd, we will be having a fellowship dinner and presentation that will surely bless you. It starts at 6:00 p.m. at Craighouse, 114 E. McNab Road, in the Pompano Plaza, Pompano Beach, Florida. This is not someone else. This is you and me participating in the passion of Christ for the glory of God. 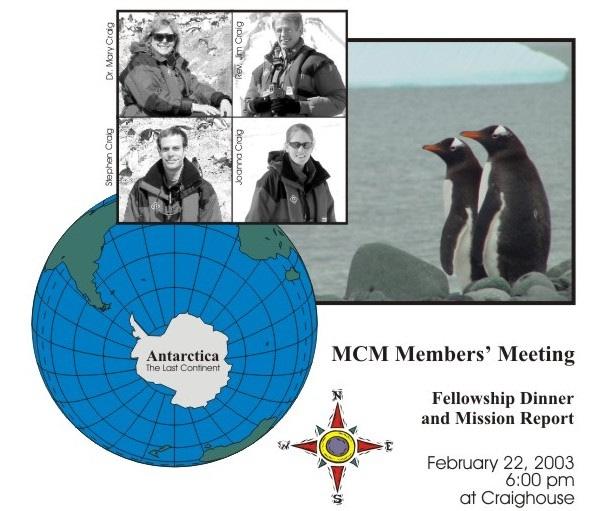 Ill be starting Bible studies at Craighouse on "How to Survive in the Kingdom of God" and "Handling Emotions in Turbulent Times." Our Tuesday nights of "Revival!" continue as well as Sunday afternoon worship and Saturdays "Pray with Steve." In March, I will again teach the Strategic Spiritual Warfare Training. If interested, please contact me. Pastor Jim will begin teaching New Testament Greek to pastors and those of you who have a burning desire to know "what the Word really says in its original language." It will be a practical approach to help you dig deeper using the tools and references for better preaching and teaching of Gods Word.

The Lord has been taking Mary Craig Ministries to new levels of anointing. We are seeing people being healed, strongholds broken, and major breakthroughs in lives touched by Gods grace and power. One woman wrote that after praying for her, her heart condition disappeared. Another person testified of pain in the legs being healed. Yet another received a "surprise supply." And someone else had a major stronghold broken by the power of God. Scientific studies have proven that "prayer changes things." So come to Craighouse Tuesday nights or Friday nights and receive prayer for your special needs. Its free, its fellowship with the saints, and its flowing with the anointing of the Holy Spirit!

To the praise of His glory,

And there they preached the gospel. (Acts 14.7)