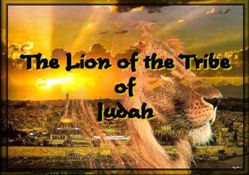 The Lord Roars Out of Zion

Names of things are important. Today people give a lot of thought when they name their children. Most try to think of the long-term implications. They want their children to succeed, and so they give them names they think will benefit their children in life.

God names people, too. He sometimes changes people's names, usually in terms of their destiny or purpose. God gave Adam the task of naming the animals. When it comes to the lion, three different words are used in Hebrew: 'ari' which is directly a lion, sabal, which denotes a lion with a fierce countenance, and lebe, an old or grand, great old lion. Jesus, the Lion of Judah is all of these. He is the young lion, strong and conquering; the older wise lion over the ages; and the fierce lion protecting His own.

The lion is tenacious, valiant, strong, fierce, devouring, and forceful, with an ability and bent toward devouring the enemies of those under his domain. The Word often mentions the teeth of lions and spans the young lion of strength and conquest to the grand, great old lion--wise, heroic, battle-tested, ruling.

What do we know about lions roaring? A lion's roar can be identified by other lions. His roar calls to his tribe. His voice is identifiable. Lions roar to establish their territory. Others hearing that roar are to understand that his rule must be acknowledged through a corresponding submission if desiring to live in that territory. That roar also warns any intruder or upstart that defying the ruling lion will lead to a fight for dominance. There is no shared dominion. And then the lion may roar to express his satisfaction after a feast, to say he is content.

In the Word of God, two lions vie for dominance in our lives. The devil roars as he walks about seeking whom he may devour. (1 Peter 5.8) He wants us to identify with his authority, submit to his rule, not defy him or fight him, and bring him satisfaction as he eats us like prey. A conquering lion, after all, knows from experience that once his prey is caught, consuming the prey comes only as an afterthought.

To conquer the devil as a roaring lion, it takes another roaring Lion to defeat him. That lion is the Lion of Judah. (Gen. 49.9, 10; Heb. 7.14; Rev. 5.5) Indeed, the imagery of the lion is applied ten times more to the Lord than to Satan. The Lion of Judah roars out of Zion; and as we place our faith in Jesus Christ, God's Word comes out of our mouth with a roar challenging and defeating the devil. As we submit to God, resist the devil, the devil flees. (James 4.7) As we humble ourselves before the Lord, we receive grace. (James 4.6) As we declare the Lion of Judah to be our Lord, we identify with His authority, submit to His rule, repent when we are warned, and seek to keep Him satisfied. The Lion of Judah is our refuge, our protector, our provider, and the One to whom we give allegiance. Rest assured that when the Lion of Judah roars in defense of His own, He wins the dominance in our lives.

Believers have been bought with a price and our lives are not our own. The Lion who roars is also the Lamb slain before the foundation of the world. Jesus made Himself of no reputation and became the sacrifice that God our Father accepts as payment for divine justice. Jesus' one--time sacrifice for sin paid in full the debt note of sin. Because of this sacrificial offering up of Himself to God, we are forgiven; we have peace with God; we are redeemed by the Blood of the Lamb; the wrath of God is propitiated; and Satan is defeated. Believe it. Live it. And then the only roar you will hear will be the roar of satisfaction, the pleasure of the Almighty.

It is not just about you or me, however. It is also about "kindreds and tongues and people and nations." (Rev. 5.9) Satan is the roaring lion seeking whom he may devour and rip apart, but the Messiah is the Great Lion of the Tribe of Judah who fiercely defends His own. This Great Lion also roars and shows Himself stronger than His devouring contender for the crown.

"He couched, he lay down as a lion, and as a great lion; who shall stir him up?
Blessed is he that blesses you, and cursed is he that curses you." Numbers 24.9

Balak, the king of Moab, didn't like these words of Balaam. Balak wanted destruction. But Balaam had to speak the words of God. He could not effectively curse what God has blessed. Judah is the lion's whelp (Gen. 49.9, 10) and the scepter will not depart from Judah. Jesus is the Lion of Judah, strong, sovereign, divine in justice and judgment, and triumphant. So what stirs the great lion?

For the Lion of Judah will roar. The Lord will roar as a lion. A roar will come out of Zion, astonishing enemies. In Joel, for example, the locusts consuming the land like an army, locusts described as strong and without number, whose teeth are the teeth of a lion, and with the cheek teeth of a great lion, these locusts warn about the coming day of the Lord. Just as the plague of locusts in Moses' time mocked Egypt, so this locust invasion rebukes God's people who have forgotten the Source of their prosperity. These "fangs of a lioness" represent the Lord jealous for His land and His people. He is after repentance, a returning unto Him and alignment with His will and ways.

As then, so nowthe people of God should be weeping and fasting and crying out to the Lord. Unparalleled judgment should cause us to wake up. Armies of insects--locusts--should remind us that locusts become like lions when armed with a divine commission. (Joel 1)

Rend your heart. Weep between the porch and the altar. Say, "Spare Your People, O LORD, and do not make Your inheritance a reproach, a byword among the nations. Why should they among the peoples say, "Where is their God?" (Joel 2.17) Then the Lord will pity.

The Lord will restore the years the locusts have eaten, the cankerworm, and the caterpillar, and the palmerworm, God's great army which He sent. (Joel 2.25)

Call upon the Name of the Lord. (Joel 2.32) Learn from the lesson of the locust invasion. God will judge the nations. There will be those who escape.

The LORD roars from Zion and utters His Voice from Jerusalem.
And the heavens and the earth tremble; but the LORD is a refuge for His people.
And a stronghold to the sons of Israel. (Joel 3.16)

Jerusalem will be holy. And strangers will pass through it no more as God avenges His own for the violence against the children of Judah. (Joel 3.17ff) The Lion of Judah reigns in triumph. Never forget it!

June 27th was our Barnabas Project distribution here in South Florida. Hundreds of families were blessed, encouraged, and given a little lift of tangible help during these difficult times. Rev. Jim Craig, the MCM Board, and I thank you for your generous support. As you give generously, gladly, graciously, and as the Holy Spirit guides, you enable us to minister in Christ's Name to the lost, to the hungry, to the thirsty, to the broken, to the displaced, to the forgotten, to the orphaned, and to the poor.

Likewise, we are reaching out to more and more people through MCM media outreach, Bible teaching, worship services, evangelism, "refrigerator ministry," healing, our new Kinetic Koinonia, and the small group ministries of Craighouse®. Craighouse®, the community outreach of MCM, is a Bible fellowship of apostolic, anointed people, faithful and able to minister to those desiring to be overcomers in Christ. People come as they are and leave as God intends them to be--saved, healed, and delivered.

Serving the Lord of Glory,

P.S. Go to www.marycraig.org. Order books from our Catalog section using PayPal. Worship with us 4:30 p.m. Sundays. Grow and flourish in small group ministry at Craighouse®, located in the Pompano Plaza at 114 E. McNab Road, Pompano Beach, FL 33060. Log on to www.craighouse.org for a map and more events and Bible studies. Reach MCM at 954-491-7270. Send in your prayer requests.

The kingdoms of this world are become the kingdoms of our Lord, And of His Christ; And He shall reign forever and ever. Rev. 11.14